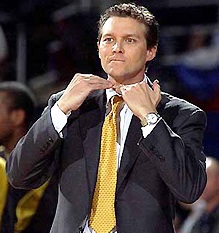 Snyder replaced the late Dennis Johnson, who had died of a heart attack while jogging in February 2007, as the Toros’ permanent coach in the fall of 2007, and led Austin to the D-League Finals. The following season, Snyder was named D-League Coach of the Year. This past season, the Toros made the D-League semifinals before losing to Rio Grande.

Before coming to Austin, Snyder spent seven seasons coaching the men’s basketball team at the University of Missouri. He resigned during the 2005-06 season amid allegations of wrongdoing connected with the MU program, according to NBA.com.