Charity Dynamics proves to be dynamic employer in Austin

In late August, Charity Dynamics Inc. nearly doubled the amount of office space at its Austin headquarters—expanding from about 3,500 square feet to about 6,500 square feet at 3420 Executive Center Drive.

The move into larger digs came on the heels of the company landing at No. 429 on the latest Inc. 500 list of the fastest-growing small businesses in the country. Charity Dynamics’ revenue climbed from $257,470 in 2006—two years after the company was founded—to $2 million in 2009. The company’s three-year growth rate: a staggering 695 percent. 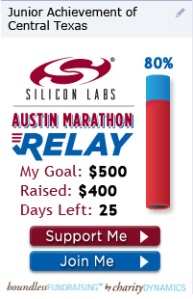 The company, which provides an array of online services for nonprofits, now has three available positions in Austin: interactive services director, online strategy consultant and project manager. In all, Charity Dynamics employs 30 people—26 in Austin, two in the Washington, D.C., area, one in New York City and one in Denver.

President Donna Wilkins (photo) says the company has added 12 employees this year in Austin, with several more jobs to be filled by the end of 2010 beyond the three currently advertised.

“We are still finalizing 2011 plans,” Wilkins says, “but anticipate a number of new positions.”

To check out job openings at Charity Dynamics, click here. You may send your resume to jobs@charitydynamics.com.

Traits that Charity Dynamics seeks in new hires include being proactive, conscientious, self-directed and flexible, and possessing a can-do attitude and a sense of humor, Wilkins says.

“We have a casual, collaborative environment and entrepreneurial spirit. Key to our success is a shared passion for helping nonprofit organizations exceed their goals and expectations,” says Wilkins, who previously was vice president of client services at Austin-based Convio Inc., a provider of fundraising software and services.

Customers of Charity Dynamics include the American Cancer Society, the Arthritis Foundation, Autism Speaks and the National Multiple Sclerosis Society. In June, Charity Dynamics said that nonprofit groups had garnered more than $30 million through the company’s Boundless Fundraising iPhone and Facebook application since its launch in early 2009.

To view a video about the Boundless Fundraising product, click here.

← Seeking a job in Austin? The answer, my friend, may be blowing in the SolarWinds
Austin’s Luminex benefits from biotech boom →